Our 13 week picnic marathon started on Friday 13 April, we’ll be visiting a haunted location every Friday until Friday 13 July 2018.  Each week we set off armed with sound recording equipment, digital cameras and an original Polaroid camera – to take an unfakeable and unique Polaroid image at each location.

May the Fourth was with us for our picnic in the shadow of the Skirrid Mountain (Ysgyryd Fawr) near Abergavenny. It is also known as the Holy Mountain or the the Sacred Hill. The Welsh word Ysgyryd describes the shape of the mountain as having been ‘shivered’ or ‘shattered’. 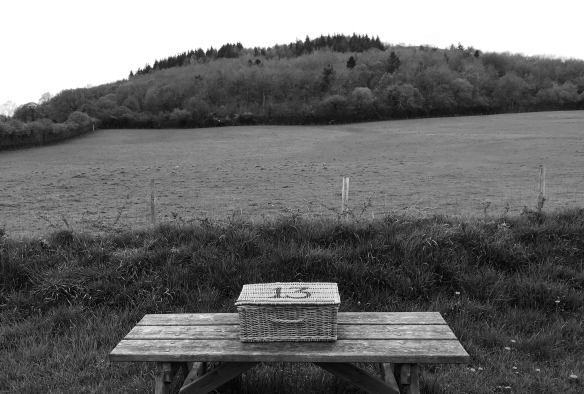 After our picnic of 13 we headed for the infamously haunted Skirrid Mountain Inn for a pint. The pub is in the village of Llanfihangel Crucornau and reputed to be one of the oldest pubs in Wales. The inn is said to have been standing for over 900 years, having been recorded during the Norman Conquests of the 11th century. The wood of the ancient front door has been carbon dated at around 1,500 years old.

The Inn is steeped in history and legend and, perhaps unsurprisingly, has a serious reputation for hauntings. The pub was used as a public meeting place, a courtroom and place of execution with an oak beam still installed above the stairwell reputedly scorched and scarred by the rope. It is believed that between 12th and 17th Centuries around 180 miscreants met their end on the premises. The ‘hanging Judge’ Judge Jeffreys known for his royalist bias and the severity of his punishment was reputed to sit at the Skirrid during 17th Century.

There have been many reports of ghostly sightings and experiences at the pub, from the spectres of the hanged, loyal past staff (especially Fanny Price who died aged 35 of consumption in the 18th Century) and the soldiers who were brought to the pub as a temporary hospital. On the day we visited there was a convention of ghost hunters meeting in the dining room. 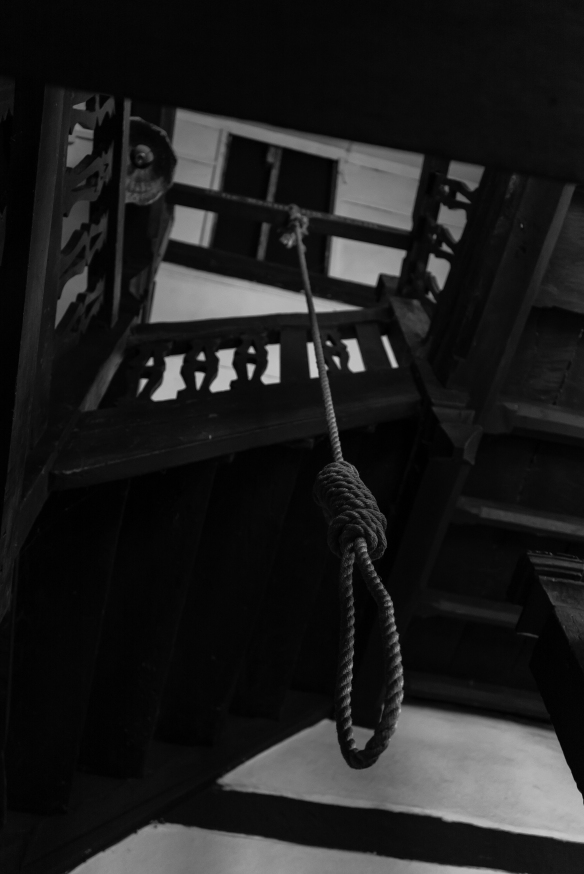 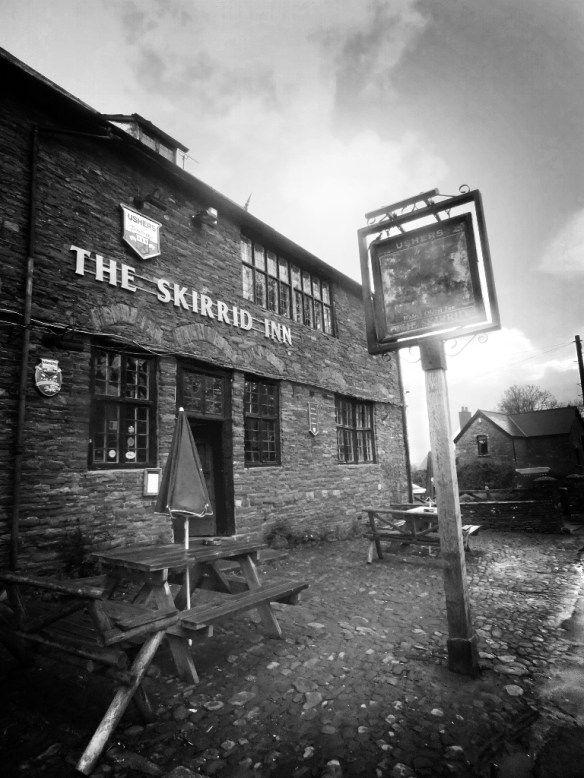 We didn’t knowingly encounter any spooks during our visit; the bustle of a Bank Holiday weekend very much filled the pub with the revels of the living. It is an immensely atmospheric building however with the wide Tudor fireplace darkened by the patina of centuries of smoke, the oak beamed ceilings and panelled walls (the timber reputedly salvaged from ships of the 16th and 17th Centuries) and the old timber windows seats and Welsh settle.

The first Friday 13th of 2017 and we decided to combine three celebrations into one to celebrate in fine thirteenfridays style.

We started the evening by setting up a radio experiment to commemorate the first public radio broadcast made on January 13th 1910 and at the same time pay homage to Jacob’s Grandad Bernard Jones, born on January 13th 1914, an inventor and pythagorean, interested in using technology to communicate with the other side. Bernard was one of the inspirations for setting up the Absent but not Forgotten project back in 2010, so we wanted to send him birthday greetings across the great divide.
Bernard was interested in EVP (electronic voice phenomenon) so we set up a detuned radio to play white noise into a Latitude 150 walkie-talkie (446.00625-446.04375 MHz)) while a Sennheiser EW100 wireless microphone kit (830-866MHz) picked up the noise at the other end of the walkie-talkie and sent the noise to a reciever where an Ipad webcast live to youtube. Bernard would undoubtedly have enjoyed the new technologies we could bring to the experiment.
Using 2 radio frequency transmitters and receivers potentially increases the chances of paranormal communication…the experiment ran while we dined in the adjacent room, the result is below. The intermittant transmission is the result of the frighteningly poor upload speeds in rural west Wales rather than any spooky goings-on we fear!

During our thirteenfridays meal we listened to the opera Cavalleria Rusticana which is cited as the first public radio broadcast in 1910 and included this song by Enrico Caruso. Not natural consumers of opera we were feeling quite high brow,  but it must be said that not all our guests appreciated the cultural adjustment (you know who you are…).

Hen Galan is the Welsh New Year or the old new year as it was before the calendar change of 1752. Still observed in the Gwaun Valley not far away, our thirteenfridays menu took a Welsh turn in celebration. 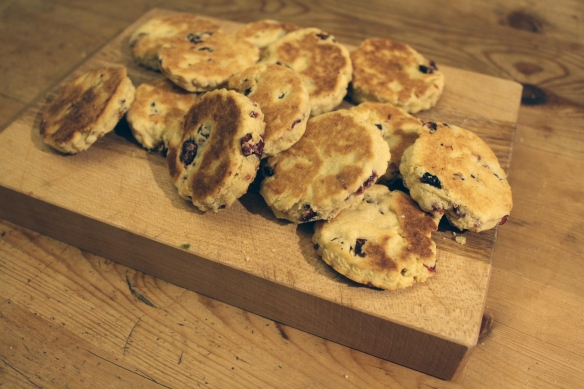 Bernard’s birthday cake was a Lemon Drizzle with 13 drizzle holes and 13 candles. In memory of the stories by Liz Whittaker about a strange series of events on another of Bernard’s birthdays some years ago, we had a helium balloon and phone at the table throughout the meal…

The ancient Roman festival of Lemuria is thought to be a pre-christian antecedent of All Saints Day.  Taking place from May 11th to 13th, feasts and rituals took place  ‘…to exorcise the malevolent and fearful ghosts of the dead from their homes. The unwholesome spectres of the restless dead, the lemures or larvae were propitiated with offerings of beans.’ (read more)

So having dined on oatmeal cakes (a nod to the Vestals’ ‘Mola salsa’,) Passum poached pear pudding (passum was a sweet raisin wine with honey), garnishes of wild violet flowers and more honey we continued the evening with a short and effective ritual –

‘Ovid notes that at this festival it was the custom to appease or expel the evil spirits by walking barefoot and throwing black beans over the shoulder at night. It was the head of the household who was responsible for getting up at midnight and walking around the house with bare feet throwing out black beans and repeating the incantation, “I send these; with these beans I redeem me and mine” (Haec ego mitto; his redimo meque meosque fabis.) nine times. The household would then clash bronze pots while repeating, “Ghosts of my fathers and ancestors, be gone!” nine times.’

As a nod to the traditional offering to the goddess Artemis during the month of Elaphebolion we also had 13 slices of Haunting Honey Cake.

A meal for Friday 13th of February.
Apparently our modern St Valentines day has its roots in the ancient Roman festival of Lupercalia and the start of Parentalia. For this thirteenfridays meal we combined modern and ancient Italian dishes, packed with aphrodisiac ingredients to stimulate and arouse the spirits!

Spooky Scallops served on 13 Oatmeal cakes with a Roman cumin sauce for shellfish. Salt meal cakes were apparently prepared by the vestal virgins to burn as offerings on Lupercalia.

13 Violently Violet Truffles – Violets and flower garlands were (according to Ovid) laid as sacred offerings at family tombs during Parentalia. 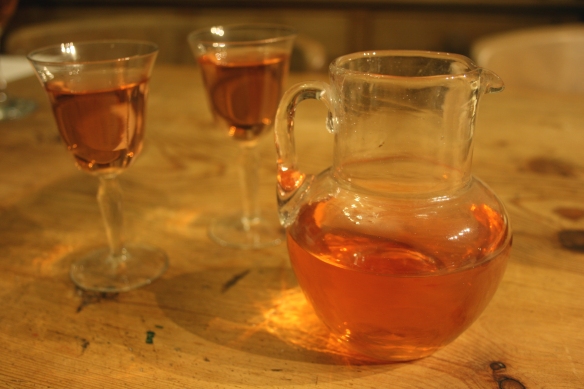 All accompanied by a Roman favourite – Rose Petal Wine!

St Anthony is the patron saint of lost things, how appropriate for Absent but not Forgotten that in 2014 his feast day of 13th June is on a Friday.  Coinciding with a full moon, known as a strawberry or a honey moon, a great excuse for a thirteenfridays special.

So cheese ( because that’s what the moon is made of…), fish and bread for St Anthony’s feast day, honey and strawberries for the June moon and our usual thirteen-ness in ingredients and numbers. Blue Moon beers and honeyed mead to tipple.

Full Moon Cheesecake
Thanks to Kirsten for the Full Moon baked Cheesecake served with 13 strawberries and honeyed cream – totally delicious. 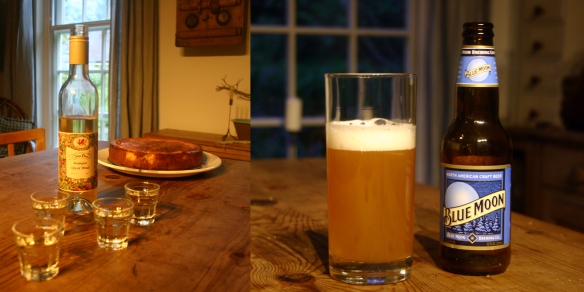 What’s in a number?
There seems to be a general consensus that both 13 and friday are individually unlucky so together they become disastrous! this article might explain some of the origins of our fears!

Several stories revolve around food and meals so to celebrate the two Friday 13ths in 2013 (13 weeks apart) we are created 13 meals over 13 weeks each involving the number 13.

The work was documented here from September to December 2013.

To celebrate Friday 13th and the end of our thirteenfridays project in December 2013, we invited 13 guests to partake in a Lussinatt feast of 13 at Small World Theatre in Cardigan.

December 13 is the festival of St Lucy, particularly celebrated in Scandanavia – the festivities celebrate light in the darkest part of the year – but there is also an older tradition on the same day –Lussinatta, the Lussi Night. On the night of December 13 Lussi, a female being with evil traits, like a witch was said to ride through the air with her followers, called Lussiferda. According to tradition, children who had done mischief had to take special care, since Lussi could come down the chimney and take them away. The tradition of Lussevaka – to stay awake through the Lussinatt to guard oneself and the household against evil, has found a modern form through throwing parties until daybreak. 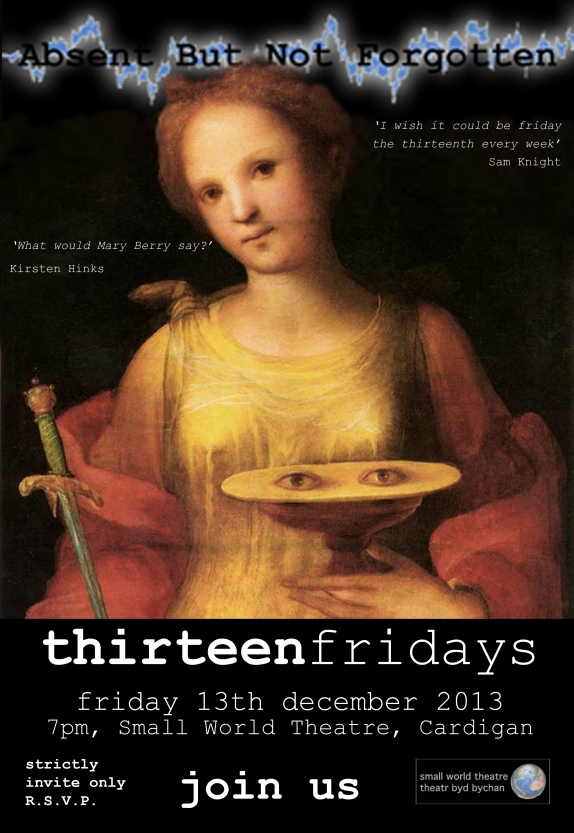 Our masked waiters (the lovely – but truly spooky – Nick and Beth) greeted guests with traditional Lussekatter saffron buns and a glass of 13 Ingredient non-alcoholic Glogg – a hot, mulled drink with fruit and nuts (with a tot of vodka for those needing extra fortification!). 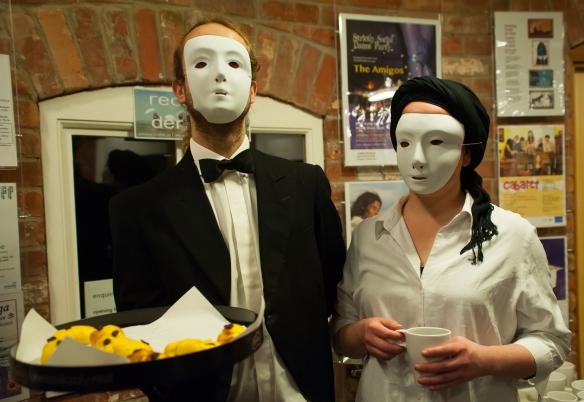 With this appetiser guests were invited to select a small envelope containing a numbered badge.  The randomly selected numbers gave us a seating plan, seats marked by a small numbered bottles of wine placed on the table. 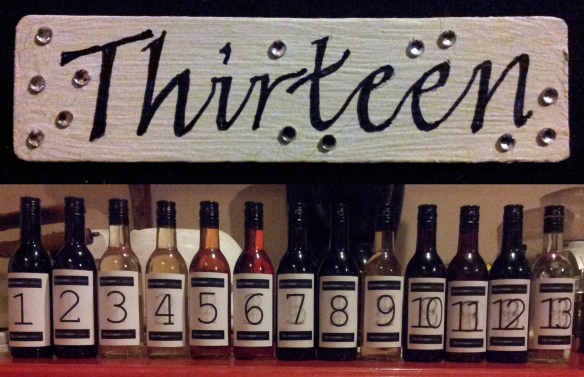 Thirteen guests at a dinner table is considered bad luck – so we laid a 14th place setting where we projected images of all the dishes created during the 13 previous weeks (each image displayed for 13 seconds). 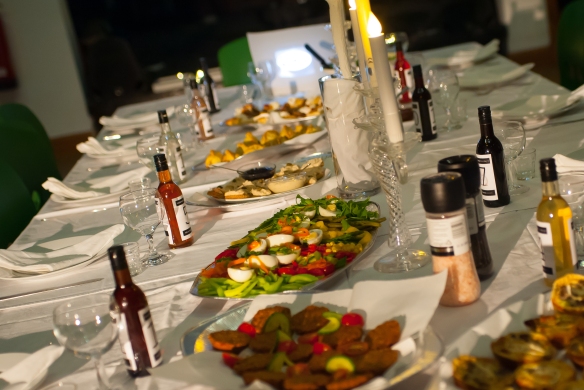 During the meal, whilst guests tried to guess the contents of the mini wine bottles, (each a different variety of country wine), we showed a selection of 13 film clips of dinner table scenes from vintage films.

Throughout the evening our waiters without faces slowly and silently served wine and cleared empty plates, approaching guests with dishes and awaiting their attention – quite disconcerting!

During the evening we showed a compilation of our previous Absent but not Forgotten projects around the venue.

We asked our guests to contribute a choice of spookily themed music to the evening and we were honoured that singer, Julie Murphy chose to sing us a beautifully haunting song.

Here’s the rest of the soundtrack…

A chance to chat and digest….then cue the Omen soundtrack…it was time to introduce the 13 desserts… 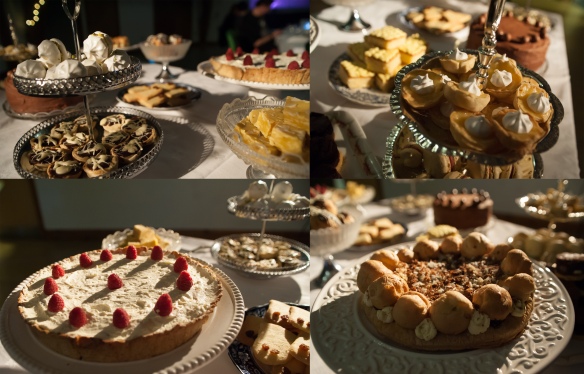 We would like to thank all our guests for coming to our thirteenfridays Last Supper.  Special thanks to Small World Theatre for the venue, our waiters Beth Guiver and Nick Johnson for their wonderfully sinister silent service, Marc Hayes and Sam Vicary for taking some lovely photographs, Mari Beynon-Owen for the Ice Cream, and Kirsten Hinks for the terrifyingly good dessert trolley! 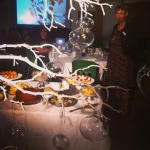 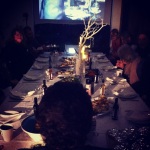 ‘What are we going to eat on Fridays after next week?’  Kirsten Hinks

The twelfth of our thirteenfridays meals.
Tonight’s Menu –

Absent But Not Forgotten
Blog at WordPress.com.