Our 13 week picnic marathon started on Friday 13 April, we’ll be visiting a haunted location every Friday until Friday 13 July 2018.  Each week we set off armed with sound recording equipment, digital cameras and an original Polaroid camera – to take an unfakeable and unique Polaroid image at each location.

This week we headed off in search on the trail of a historic haunting at St Dogmael’s Abbey in Pembrokeshire.

According to author Brian John in his ‘Pembrokeshire Ghost Stories‘ book after the Abbey fell, an inscribed stone was used as a bridge over a small brook in the abbey grounds.  ‘While it was very handy during the day, it had a fearsome reputation at night.  Many people saw a mysterious ghostly figure (referred to simply as “the white lady”) gliding over it at the witching hour of midnight.’.It was this reputation, it is suggested, that prevented the stone being lifted and broken up to be used as building material in the following years when the abbey ruins became a convenient source of stone for local buildings.  Laid facing down the inscriptions on the ‘Sagranus Stone’, as it is called, are very well preserved and the stone can be seen in the nearby parish church of St Thomas.  Read more about the stone here. 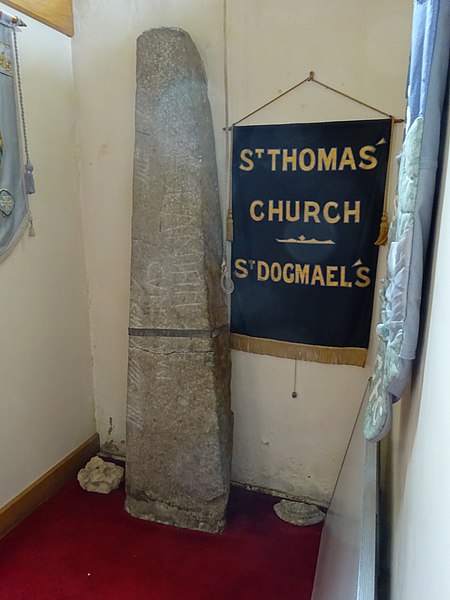 After wandering the abbey ruins (and not seeing any white ladies) and being unable to identify the brook’s location, we decided the most appropriate picnic site was in the old abbey church crypt.  The now exposed crypt was once underneath the floor of the presbytery, with a small stairway leading down into the space; the remains of the arches and columns are still visible around the edges. Somebody had been there before us and made symbolic markings on the floor…it reflected the original layout illustrated on the information board in the abbey…a midsummer ritual perhaps; all a bit Dennis Wheatley… 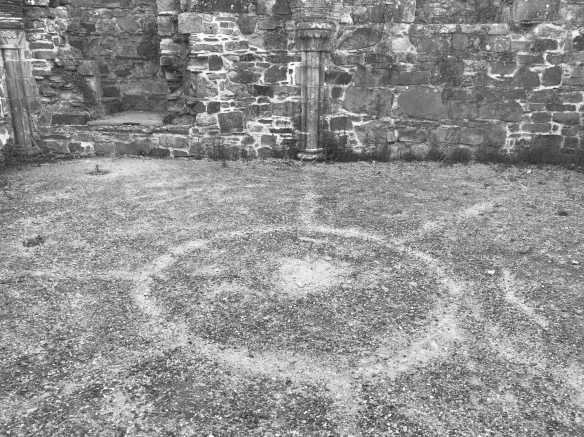 As we laid out our picnic feast in the late evening, the sky above us filled with swirling mass of corvids, we held our breath momentarily as they whirled around worried that they might take a fancy to the feast below.